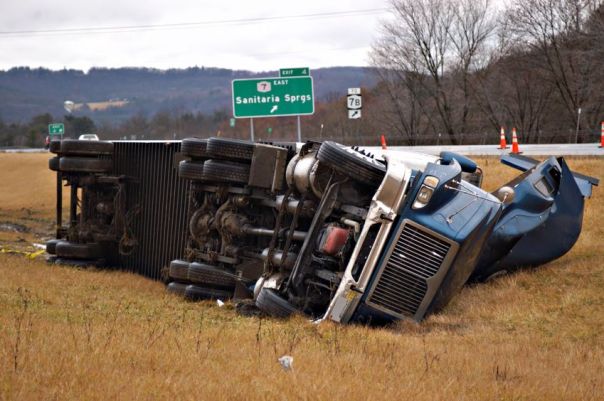 Accidents involving large trucks are among the most serious accidents and most deadly in the United States. At the Law Offices of David B. Shapiro, we recognize that handling these cases requires a thorough understanding of commercial vehicle regulations on both the federal and state level. Trucking companies are required to follow Federal Motor Carrier Safety Regulations concerning their equipment and their driver’s hours of service.In Maryland, the department of Transportation is also charged with the task of adopting regulations regarding the safety of motor carriers Mar. Stat. 11.04 .

When someone is injured in a truck accident, many people blame the motorists or motorcyclists for their own injuries but the fact is that the trucking companies and truck drivers are often to blame. Trucks are frequently put on the roads and highways that are not properly maintained. Overloading a truck is another big problem. Often companies put more freight on a truck than it is rated for and this can cause devastating results.

Many trucking companies have mileage incentives or requirements for drivers which often lead to excessive time on the road without rest. Other trucking companies put tremendous pressure on truck drivers to meet certain delivery times which causes faster speeds so they will arrive on time. These practices often end up causing accidents with other cars, trucks, motorcycles, bicycles or pedestrians.

The most common causes of Maryland truck accidents are the following:

Maryland attempts to deal with this by imposing strict rules on the number of hours a driver can be at the wheel of a large truck. Generally, a person who operates a commercial motor vehicle solely in intrastate commerce not transporting any hazardous material may not be at the wheel more than 72 hours in any period of 7 consecutive days. Despite this rule, careful examination of records after an accident often shows serious and even fraudulent violations of those safety regulations. However, trucking companies in Baltimore are only required to maintain many of those records for six months. Without obtaining those records before they are destroyed, the injured person or survivors of a person killed in a truck wreck will have a much more difficult time proving the trucking company’s negligence. For this reason it is imperative that a Maryland truck accident attorney be contacted immediately after an accident.

The following represents facts and figures regarding large truck accidents and the serious damages they inflict on our roadways every year:

Nationwide, one out of nine traffic fatalities in 2008 resulted from a collision involving a large truck. In 2008, 380,000 large trucks (gross vehicle weight rating greater than 10,000 pounds) were involved in traffic crashes in the United States; 4,066 were involved in fatal crashes. A total of 4,229 people died (11% of all the traffic fatalities reported in 2008) and an additional 90,000 were injured in those crashes.

Large trucks were much more likely to be involved in a fatal multiple-vehicle crash – as opposed to a fatal single-vehicle crash – than were passenger vehicles (82 percent of all large trucks involved in fatal crashes, compared with 59 percent of all passenger vehicles). Most of the fatal crashes involving large trucks occurred in rural areas (62%), during the daytime (66%), and on weekdays (78%). The percentage of large-truck drivers involved in fatal crashes that had a blood alcohol concentration (BAC) of .08 grams per deciliter (g/dL) or higher was 1 percent in 2007. The BAC level for all commercial vehicle operators in every state in the U.S. is .04 g/dL, half of the legal limit of .08 for all other drivers.

Laws involving Truck accidents are governed by regulations that apply specifically to commercial trucking companies, their trucks and their drivers. The technical, mechanical, engineering, and accident reconstruction aspects to these complex cases distinguish them from other motor vehicle accidents. For these reasons, victims should consult an experienced Maryland truck accident lawyer as soon as possible after a crash.Get a FREE evaluation from an experienced Baltimore truck accident lawyer.

In all motor vehicle accident cases it is essential that measures be taken promptly to preserve evidence, investigate the accident in question, and to enable physicians or other expert witnesses to thoroughly evaluate any injuries. If you or a loved one is a victim of a truck accident, call the Law Offices of David B. Shapiro now at 410-576-9100. The initial consultation is free of charge, and if we agree to accept your case, we will work on a contingent fee basis, which means we get paid for our services only if there is a monetary award or recovery of funds. Don’t delay! You may have a valid claim and be entitled to compensation for your injuries, but a lawsuit must be field before the statue of limitations expires.